Client No 5 by Joy Fulcher- Review and Book Tour 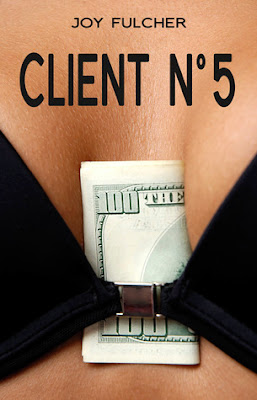 Ally loves her job. She makes good money, has great work friends, and lives in the best city in the world.
Sure, being an upscale escort has its downfalls. The sex is usually bad, and it’s always about satisfying the client’s needs, not one’s own. But Ally didn’t end up in this business for lack of other opportunities. She’s good at what she does and is proud she can command a high price for it. What Ally really gets out of it, though, is a sense of freedom, of power and control that she severely lacks in her private life. She’s closed off from everyone around her, including herself.
Everything gets thrown into chaos, however, when she gets the call for a new client, her fifth of the night. Scott Walker is different. He’s a young go-getter executive accustomed to getting whatever he wants. And ultimately he doesn’t want Ally’s body; he wants her heart. But that’s the one thing she refuses to give up.
Ally is forced to make the hardest decision of her life: to stay in her comfort zone or step outside it for someone who might just be worth the risk.
If you think you've read every story about a hooker with a heart of gold, think again. Sexy and edgy, Client No.5 will seduce you into the intimate world of a high-class call girl, strutting its stilettos into the raw, erotic territory Pretty Woman feared to tread.

Ally is an upscale escort and is great at her job. She makes god money and enjoys several aspects of her work. The parts of the job that are unsatisfying, such as her not receiving much sexual pleasure out of the majority of her encounters, are balanced by the power and control she feels and the pride she takes in her work. She is very expensive and worth the price. After a long evening of more clients than she usually takes on, her manager arranges for one final "date". Client number 5 turns out to be very attractive and surprises her with the kind of sexual pleasure she hasn't experienced in a long time. Scott Walker is a young successful man who isn't in the business of hiring escorts, but he decides to try it out after some encouragement from his cousin (Ally's manager). He feels a strong connection to Ally and really wants to get to know her and try to have a real relationship. Ally has a lot of rules in place, and has not been tempted to break them before now.

This is a sexy book with a boat load of sex in it. Lots. The thing I liked about it is that is provided an interesting look into the escort world and not the typical stuff that we read about in other books in this genre. Ally is open and honest and I liked that her character had grit and wasn't a secret virginal lady pretending to be a prostitute and waiting for prince charming to take her away from that life. She knows what she does and she owns it. Even in the face of meeting someone she is genuinely attracted to, she isn't just about to run away with him and leave her work and her independence behind at the first offer she gets. I like that Ally did make some tough choices and ultimately made some big changes in her life, but I really like that she did it on her own terms and in her own way.

There were things that I liked about Scott, but I really didn't love Scott. As far as sexy book boyfriends go he was okay and I was really hoping that Alley would get what she wanted, but I didn't feel connected to his character. i thought he was a little too sappy and naive. I also found him a little whiny at times. Ultimately, I'm glad the way this book turned out and I did enjoy reading it. I think the grit and real feel to Ally and her friends and watching her work through her own stuff was what made this book good. I would read more by this author in the future.

About the Author:
Joy is a fiery redhead who takes full advantage of the Australian lifestyle, sunning herself on tropical beaches and flirting with handsome lifeguards. She loves cats, books and chocolate, and of course the male physique. Joy started writing as a teenager and never stopped, although she writes about much more mature topics now. You can often find Joy browsing the shelves of her local bookstore or researching her favorite city, New York, in preparation of fulfilling her lifelong dream to live there one day.