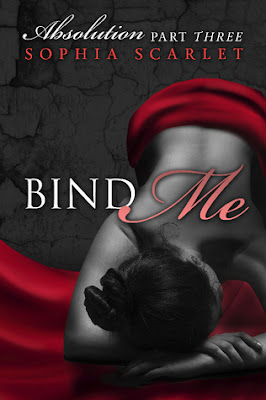 She told me she loved me. She told me she wanted a future with me. Was it all a lie?
When David Lake learned the truth about Agnes Brighteverything changed. Will the passion they shared be enough to bind them together or was everything between them a beautiful illusion?

Bind Me by Sophia Scarlet
My rating: 4 of 5 stars

David has just found out the truth about Eliza (Agnes), although he found out in a pretty terrible way. Agnes would have preferred to take care of everything and reveal the information to David in a different way, but there is no denying that it needed to happen. There is a lot of angst, hurt, and confusion as David tries to figure out if what he and Eliza has was real. Agnes hopes that she can help David understand that she has never lied to him about her feelings or intentions, and also that he will forgive her.

This is the third and final installment in this series, and the other two books should definitely be read before this one. I already cared about both David and Agnes, so this was tough because both characters were hurting and struggling. I was really hoping that they would find their way through this and be able to return to their relationship on more solid footing. Agnes has been through a lot and I found it rewarding to see her really work through and get some closure on experiences she has gone through. Even though it was tough, I liked seeing both David and Agnes take a close look at their feelings and really evaluate what was important to them. I found this a very satisfying conclusion to a series that I enjoyed.