Resist Me by Chelle Bliss- Blog Tour and Review

Izzy Gallo has never been described as a member of the weaker sex. She’s a woman who doesn’t take shit from anyone. Growing up with four older overprotective brothers has hardened her, making her a force to be reckoned with.
Against the wishes of her two brothers, Joe and Mike, Izzy takes a weekend trip to Bike Week in Daytona, turning her world upside down. Over her head, in a world she doesn’t understand, there’s only one man who can save her.
James Caldo has dedicated his life to protect and serve as a member of the DEA. He’s cocky, overbearing, and doesn’t take no for an answer – the Gallo men have nothing on him.
When their paths cross, James makes Izzy question everything she believes about completely surrendering to the opposite sex.
Does James have what it takes to overpower the headstrong Izzy, capturing her heart forever?

Resist Me by Chelle Bliss
My rating: 4 of 5 stars

Izzy Gallo is a tough chick who doesn't let anyone tell her what to do. This includes her over-protective brothers who discourage her from going to Daytona for a bike rally that they don't feel will be safe. Izzy goes anyway and things do not turn out like she expects. She is saved from danger by a friend of her brothers who she had a one night stand with at another brother's wedding. Izzy never expected to see James again, and never wanted to since he made her feel in things in one night she hasn't felt since. James is dedicated to his work with the DEA, but he has known he wanted Izzy since their night together. He isn't about to let her slip away again.

There isn't a lot of unpredictability here in terms of the story line, but at the end of it all I really didn't care. I like these characters a lot, and enjoyed spending time with them. Both Izzy and James like control, but it is clear that they have met their match in each other. There is a lot of push and pull on Izzy's part as she tries to make sure that falling in love doesn't mean losing your identity. The chemistry between James and Izzy is extremely hot and I was cheering them on the whole time. We get to spend some time with the Gallo family as well, and it is always great to experience a family with such a fierce love for one another. I will be continuing with this series.

Me: Lying through your teeth, doll. You’d be slamming yourself against my cock, taking all I had to give.
Sexy Fugitive: STOP.
My dick throbbed, aching for release. My balls had to be blue with the way they felt. Bastards may burst at any moment. I needed inside Izzy and I didn’t want to wait. I knew that if I jerked off, it wouldn’t fucking help. My hand didn’t compare to her milking the life out of my dick.
Me: Panties soaked?
Sexy Fugitive: I didn’t wear any today. J
She didn’t understand how her trying to shut me the hell up was a total cocktease. I loved it. I could go out and find some nameless woman who would lay herself out and offer her pussy to me to relieve the ache deep in my balls. I didn’t want that. I only wanted her. After having a few tastes, I was hooked. No one else would ever compare.
Me: STOP.
Sexy Fugitive: I’m almost dripping thinking of you jamming your hard, long cock inside me.
She was the devil.
Me: STOP. 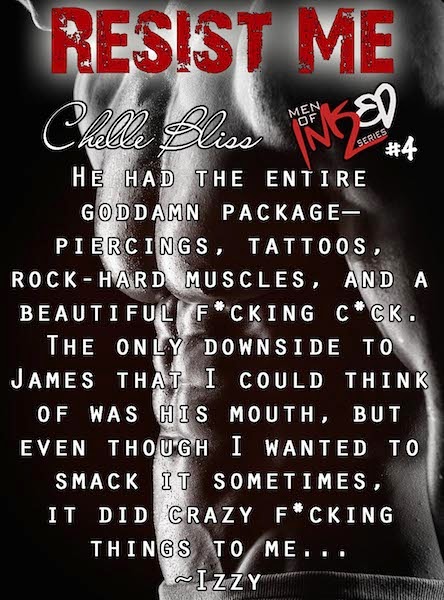