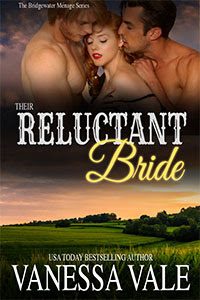 Synopsis
Emily Woodhouse is a penniless, homeless widow thanks to her recently deceased husband. His gambling ways have placed her in a desperate situation. Faced with working off his debt in the basest of ways, she chooses instead to accept Tyler and Xander's unconventional marriage proposal. She won't be marrying one man, but two.

Tyler and Xander know instantly that Emily is the one for them. Not only does the widowed young woman rouse their protective natures, she knows of their customs regarding a two husband marriage. Despite the fact that Emily needs the safety they can offer, she isn't eager to remarry. She might be reluctant, but they will show her what it will be like with two men to cherish, protect and possess her.

But the past catches up with them in the most dangerous of ways. Only in facing the past can they forge a future together.

Xander looked at me for one short moment, then lowered himself to his knees and began lifting up the long hem of my dress.
I tried to swat his hands away, but he was not to be deterred.
“What are you doing?” I squeaked. It was one thing to agree to marry and… fuck them, but it was another to do it right now.
“I’m going to show you how it’s going to be between us,”
“Yes, but why are you on your knees? Shouldn’t we be in bed? It’s not dark out,” I stammered, my palms pressing against the wood of the door.
He looked up at me and grinned. His teeth were white compared to his tanned skin and dark beard.
“You are a little reluctant after all.”
All of a sudden I was very reluctant.
“Don’t worry, baby, he’s going to make you feel good,” Mr. Tyler said, his voice a smooth timbre. He moved closer. Backed against the door, one man at my feet and the other just beside me, I had nowhere to go.
Buy Links
Amazon
Amazon UK
Barnes &Noble
Smashwords
All RomanceeBooks
Kobo- To come
iTunes- To come

Who doesn't love the romance of the old West? Vanessa Vale takes the sensual appeal of rugged cowboys a step further with her bestselling books set in the Montana Territory. They are much more than just sexy historical westerns. They're deliciously naughty reads that sometimes push the boundaries of fantasy. It's pure escapism with quite a few very hot, very alpha cowboys.

When she's not writing, Vanessa savors the insanity of raising two boys, is figuring out how many meals she can make with a pressure cooker, and teaches a pretty mean karate class. She considers herself to be remarkably normal, exceedingly introverted and fairly vanilla, which does not explain her steamy stories and her fascination with cowboys, preferably more than one at a time.

She lives in the Wild Wild West where there's an endless source of 'research' material.