Book Synopsis:
DEA agent Eve Taylor has had her fill of alpha males. When Resolutions’ operative and former lover, Dillon “Mac” McKenna, threatened her hard-earned independence, she ran. On a mission to gather evidence against a Colombian drug-lord, Eve discovers the drug-lord is helping terrorists plan an attack on American soil. Before she can escape with the vital information, she’s captured and comes face to face with her mortality…

As a teen, Mac watched his family fall apart after his mother died doing dangerous U.N. work. The possibility of losing Eve to a mission ignited an overwhelming need to protect her. When he forced her to choose him or her job, she walked away. Two years later, it seems all his nightmares have come true and he’s tasked with rescuing her from a Colombian prison. Mac has never stopped loving Eve, but does he dare risk his heart when he’s so terrified of losing…

On the run, Mac and Eve must learn to trust each other again in order to stay alive.

Note: Resolutions is a private black ops agency specializing in the near-impossible extractions of kidnap victims, hostages, and all forms of intelligence other agencies have failed to retrieve. 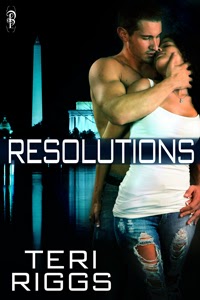 Resolutions by Teri Riggs
My rating: 4 of 5 stars

Eve Taylor is a DEA agent who gets captured during a mission to steal important data from a huge Columbian drug lord. Dillon McKenna (Mac) is a Resolutions' operative sent in to rescue Eve. Eve and Mac have an intense history. Their relationship ended two years ago when Eve was promoted to field agent and Mac told her to choose the job or him. Mac has some definite alpha tendencies, and struggles a lot with his desire to keep Eve safe from harm. His mother was killed working as a nurse while doing dangerous work for the U.N. Mac is afraid that he will lose Eve as well, even though his ultimatum already took her away from him.

This book is full of action right from the start. There are few moments when the main characters are not in danger, but being stuck together during these extreme circumstances has both Eve and Mac realizing quickly that their love for and attraction to one another is still going strong. Their passion is definitely in tact, but they quickly fall into old patterns of arguing about Mac not wanting Eve to put herself in danger, and Eve feeling like he doesn't think she is qualified for field work. As they fight together to retrieve the data Eve originally came for and to stay alive when a major drug lord is actively out to get them, they start to realize that they make a good fighting team. Mac begins to reevaluate some of his destructive thoughts and notions about Eve doing field work as he repeatedly gets to witness her extreme competence in the field. To top it all off, there is clearly someone from inside the DEA who is feeding information to the cartel and exposing any safe places and plans that Eve and Mac are trying to utilize.

I loved Eve. She was a strong smart lady who would allow herself to be tortured and killed before revealing any information to her captors. She cares enough about herself to do the job she knows she is great at even if it costs her a relationship she desperately wants. Mac was definitely frustrating at times, but watching him evolve and try to be the person Eve needs was pretty great. Throughout the story I was really hoping that first of all they would live through everything, but also that they would be able to figure out a way to be together since it was obvious how great they could be. I would read more books by this author in the future. 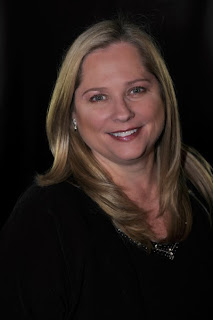 Author Info:
Teri Riggs was destined to be a writer.  As a small girl she didn’t read bedtime stories, she made up her own.  Who needed Little Red Riding Hood or The Three Little Pigs when there were so many great tales bouncing around in her head?  When she grew up and became a mother to three little girls, she continued the tradition of making up bedtime stories.  On the occasions she chose to tell conventional fairytales, Teri usually gave them a bit of tweaking here and there or added a new ending.  Her girls loved it.
After her daughters had the nerve to actually grow up and leave home, Teri discovered she had a passion for writing and jumped right in.  It came as no surprise she chose to write mysteries and happily-ever-after’s since that’s the genres she loves to read.
Teri lives in Marietta, Georgia with her husband, one of her daughters and two dogs that seem to think they rule the world.  And some days Teri thinks maybe they do.

Teri still frequently tells herself stories as she falls asleep.  The only difference now is she wakes up the next morning and turns her bedtime stories into books.