Most people know that I love this series.  Not like warm and fuzzy love, more like "these books are crazy and is there something strange about me because I love them so much?".  The first one especially left me feeling like I was sucker punched.  However, I love a book that can take me somewhere I don't expect.  The rest continued to challenge me to think and re-think where my loyalties were, and what I wanted to happen.  Great stuff!!!  Now there is a box set, and you can get all 3 for $9.99 (which is cheaper than buying them all individually).  I highly recommend this series to anyone not afraid of a dark read. 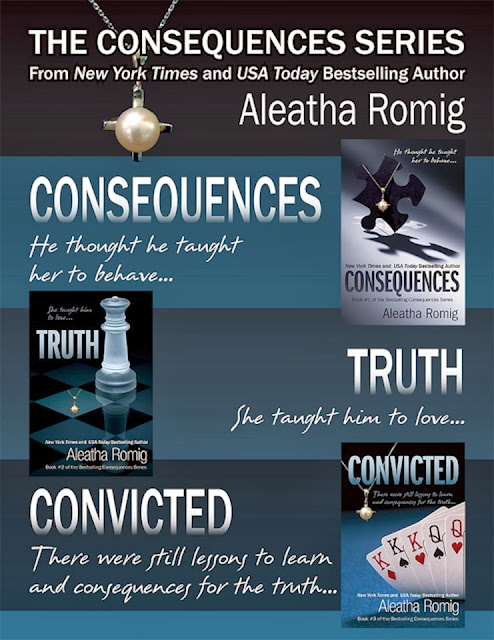 The bestselling Consequences Trilogy is now available in a single volume. New York Times and USA Today bestselling author, Aleatha Romig, has taken the world by storm with her acclaimed Consequences Series.  It has been branded “as a genre of its own” with “masterful storytelling that will keep you biting your nails and furiously flipping the pages to finally get to the emotional, jaw-dropping conclusion.”

CONSEQUENCES:  Claire Nichols wakes in an unfamiliar mansion and discovers that she’s at the mercy of billionaire Anthony Rawlings. To the rest of the world he’s charismatic and generous. It doesn’t take Claire long to learn that something more sinister lies beneath his polished facade. As time passes, Claire survives, and her strength penetrates Tony’s veneer, igniting passion where only fear had existed. As the pieces of the puzzle come together, the question becomes clear...Is anything as it appears?

TRUTH:  After enduring Anthony Rawlings’ vendetta, Claire is faced with the consequences of her new freedom.  With the help of old and new friends, she strategizes to rebuild her life and learn the truth of the past. Secrets are revealed, true foes are exposed, and Tony admits his true feelings. Claire must decide who she believes—who is telling the TRUTH?

CONVICTED:  Facing her oldest fear, Claire learns the true meaning of isolation. Who can rescue her from this nightmare? Tony? Harry? Phil? Or perhaps a more unlikely savior? Will it happen in time, or will the consequences of the revealed truths be more than she or anyone can handle? As the cards are played, who will win the game?

The box set is now live on Amazon, but will be available on B&N, ibooks, and Kobo as well.
Posted by awhit333 at 2:44 PM