Behind His Eyes (Consequences) by Aleatha Romig- Release Day Blitz! 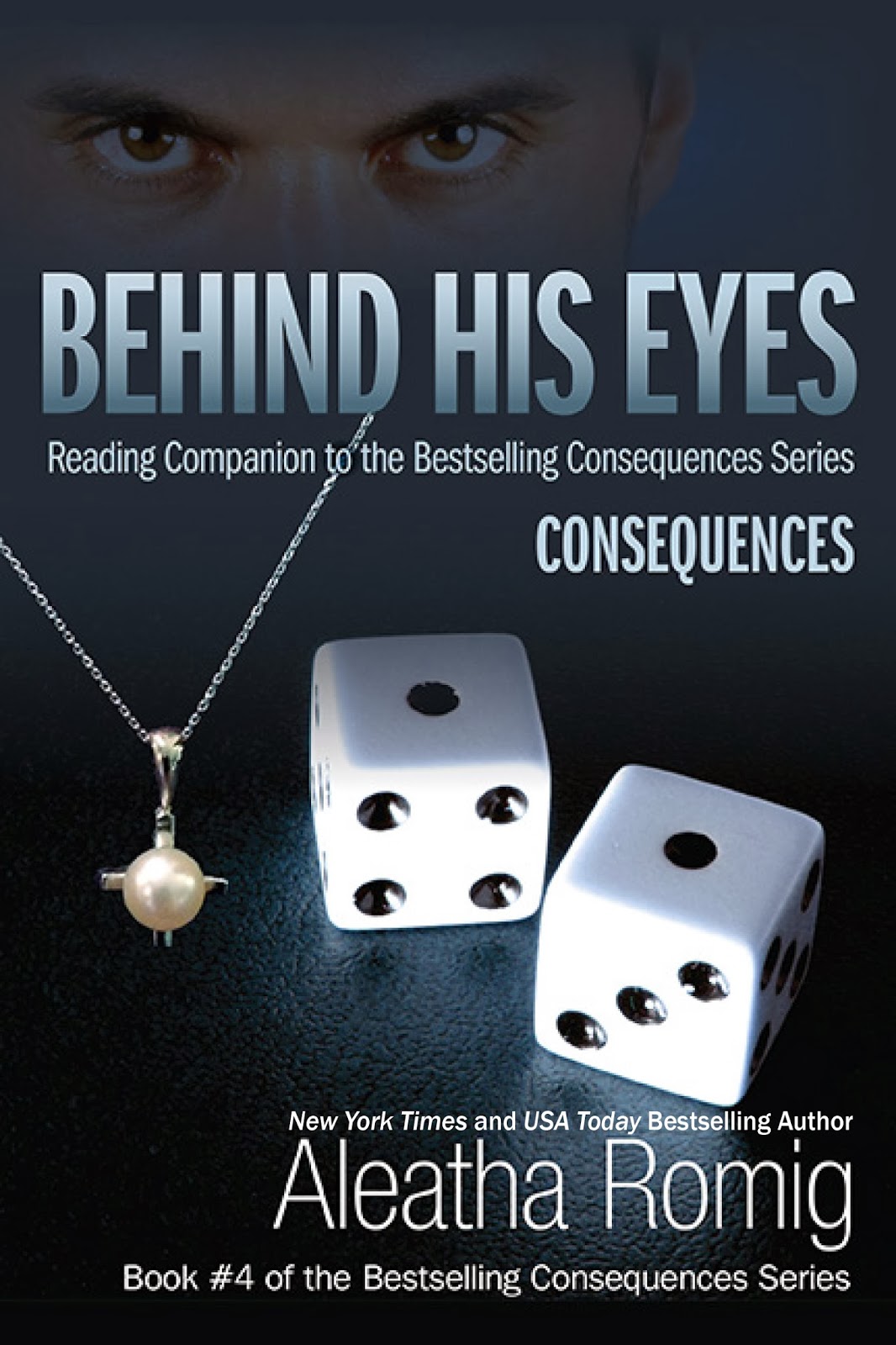 BEHIND HIS EYES—CONSEQUENCES is a reading companion, by New York Times and USA Today bestselling author Aleatha Romig, recommended to be read after completing all three books of the CONSEQUENCES SERIES: Consequences, Truth, and Convicted. It is not a standalone book and should not be read as such.
This companion was written to explore the thoughts and motivations of Anthony Rawlings, the man behind the consequences. It was not intended as a total rewrite of Consequences, but meant to enhance the reader’s understanding. BEHIND HIS EYES—CONSEQUENCES contains significant scenes from the novel Consequences, as experienced from Anthony’s point of view. It also contains never before published, behind the scenes information, as well as, a glossary of the characters, and a timeline devoted to the events within Consequences.
BEHIND HIS EYES—CONSEQUENCES is a dark journey into the mind of the man who believes that he controls everything and controls nothing. Because there is more to learn about a man who:
Once upon a time, signed a napkin that he knew was a contract. As an esteemed businessman, he forgot one very important rule—he forgot to read the fine print. It wasn’t an acquisition to own another person as he’d previously assumed. It was an agreement to acquire a soul.
—Aleatha Romig, CONVICTED

It was a long and painful acquisition—especially from Behind His Eyes! 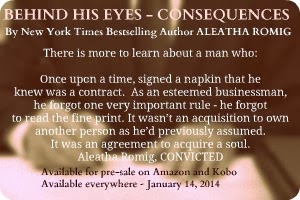 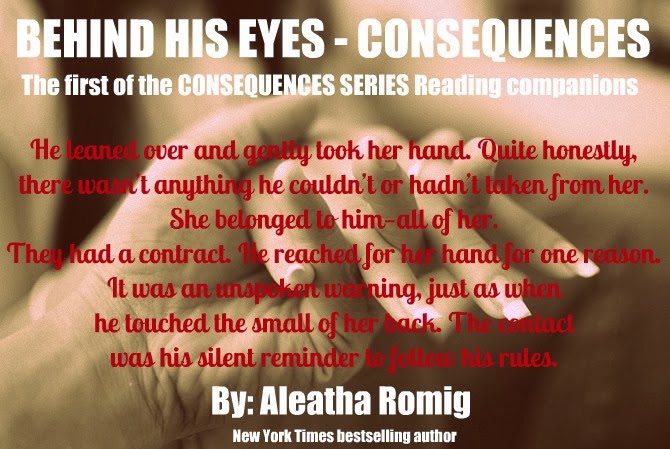 Teaser:
Behind His Eyes- Consequences
The Symphony - Late May 2010
(Consequences—Chapter 8)

“Thank you, Tony,” she replied. “This has been an amazing night. How can I ever thank you?” He pulled her close, feeling the pressure of her breasts against his chest. Turning off the riding lights, he smiled a devilish grin. “I have a few ideas.” Claire’s glance darted toward the dark glass partition separating the back from the front of the car. Tony laughed. “I promise we’re alone; Eric can’t see or hear us.” He leaned toward her. She instinctively reached for his neck and settled onto the long leather seat. As he hovered mere inches above, he watched her cheeks flush, and his erection came to life. Over the past few months, Claire had learned to respond to Tony’s commands—both verbal and none. There‘d been times when she’d hesitated. It was on those occasions that she earned the punishment she deserved. Turning his tone more serious, he raised a brow and demanded, “Now, show me that you’ve followed my rules. I want to see.” Claire’s immediate response fortified the pride of his accomplishment. She maintained their gaze as her small hand fumbled for the hem of her dress. “I can’t reach—”Tony wouldn’t let her finish—he couldn’t. He needed to taste her. Entwining his fingers in her loose ringlets of hair, he tilted her lips upward and heard a small moan before his mouth seized hers. Unable to soften his approach, he took what was his. It wasn’t enough—he wanted more. When his tongue probed, her lips parted allowing him to enter her warmth. Tony savored her sweetness as her arms once again encircled his neck. With his other hand, he reached for the hem of her dress and the cabin filled with her whimpers of anticipation. He slowly lifted the beaded material and teasingly brushed her inner thigh. “Open your legs for me,” he commanded. She obeyed and he continued to caress her soft skin. When her breathing labored and he neared his destination, Tony stopped. Releasing her hair, he sat up and gazed down at her blushed cheeks, smudged lipstick, and nearly exposed body. Grinning, he murmured, “You were amazing tonight.”Softly, she replied, “Thank you.”Leaning back, he reminded her. “But the night isn’t over.” His playful tone vanished. “Now, lift your dress and let me see if you have truly behaved.”Slowly reaching for the length of material, Claire kept her eyes fixed on his. As the material rose, she replied, “I promise, Tony, I’ve followed your rules.”He couldn’t help but think how beautiful she looked—offering herself to him. That, combined with the sound of her calling him by his personal name, was enough to release the painful tightness in his slacks. It seemed unreal that he could be on the verge of exploding, and she’d yet to touch him. Surprisingly, at that moment, that wasn’t what he wanted. He yearned for something else, and they both knew his desires came first.

Behind His Eyes- Consequences B&N 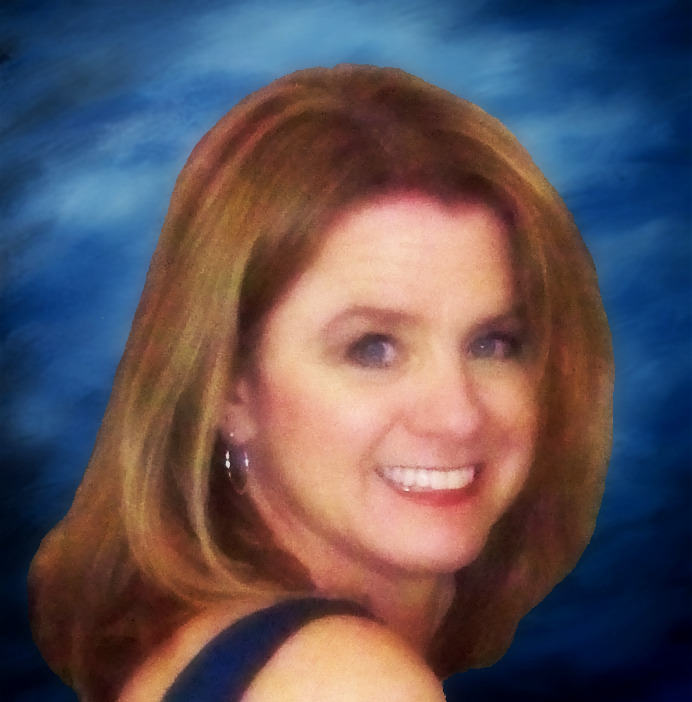 Aleatha Romig is a New York Times and USA Today bestselling author, who has been voted #1 "New Author to Read" on Goodreads, July 2012 - Present!

Aleatha has lived most of her life in Indiana, growing-up in Mishawaka, graduating from Indiana University, and currently living south of Indianapolis. Together with her high-school sweetheart and husband of twenty seven years, they've raised three children. Before she became a full-time author, she worked days as a dental hygienist and spent her nights writing. Now, when she’s not imagining mind-blowing twists and turns, she likes to spend her time with her family and friends. Her pastimes include exercising, reading, and creating heroes/ anti-heroes who haunt your dreams!

Aleatha enjoys traveling, especially when there is a beach involved. In 2011 she had the opportunity to visit Sydney, Australia to visit her daughter studying at the University of Wollongong. Her dream is to travel to places in her novels and around the world.

Aleatha is a “Published Author’s Network” member of the Romance Writers of America and represented by Danielle Egan-Miller of Brown and Miller Literary Associates.
Posted by awhit333 at 7:00 AM