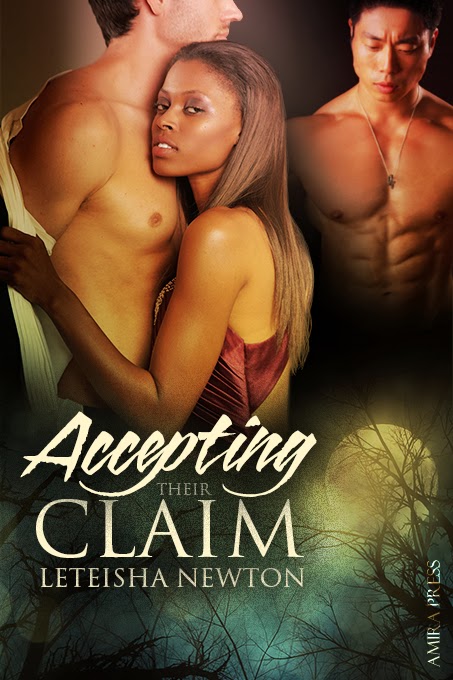 Synopsis:
Sonja Taylor, Veterinarian, doesn’t believe in love. She’s seen on too many relationships fail, so she buries herself in animals. But when she finds a salt-and-pepper and coal black wolf, she finds she has bitten off more than she can chew.
Hideki and Tobias have been loves for some time, but when they meet Sonja all bets are off. A Mate Challenge ensues between two men who love each other, but need her. Which one does she belong to? Or will it be better…if it’s both of them?
Warning: This book contains a hot male couple that has a spunky woman butting into the mix, one that they just can’t resist.


“Don’t worry, uruwashii, we won’t leave you out,” Hideki growled, and Tobias grabbed her pants. 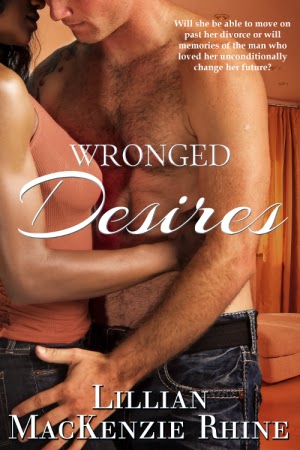 Synopsis:
Victoria Sutter is a young African American, marketing executive that has a solid knowledge of her career. Romance is another story as her ex-husband, Kemington Sutter, reappears in a drama filled stint of her life. Kemington Sutter is a wealthy heir who would rather enjoy the simple things in life like a great cooked dinner or watching an old movie. Only problem is, his life has no meaning without his Baby Girl. Will Victoria be able to successfully move on past her divorce, or will the memories of her past with the man who loved her unconditionally change her future?
Warning: This book contains hot hero that the taste of his wife's curves, and stubborn wife who makes him dominate her whenever he gets the opportunity. This read will give you chills in places that you never knew you had.

Excerpt: Wronged Desires by Lillian MacKenzie Rhine
I sauntered barefoot through the halls to the master suite while memories of Kem and
I clouded my mind. We met in a freshman economics class on the first day of class. The
professor decided it was a wonderful idea to match the quiet, invisible black girl with the
popular, athletic white boy. At the time I was an academic scholar from meager beginnings,
raised by my grandmother, who was the only mother I knew. Since I was the valedictorian of
my high school graduating class in Houston, I was awarded my pick of top business schools
in and out of the country, but I chose to be an Aggie and stayed close to home. Kemington
Sutter, wealthy trust-fund heir, was the green-eyed, sandy-brown-haired, drop-dead gorgeous
tennis captain all the women—eligible or not—swooned over, especially when he took the
court in his white shorts and auburn shirt.
With cockiness bleeding from his pores, he approached me on the first day of class,
the green-eyed devil with only a few tattoos on his arms at that time. I resisted his charm
for months, but by the second semester we were dating and making passionate love every
evening like we were shooting for high marks on a statewide sex exam.
I remember the first time I took him home to meet my grandmother. He was dressed in
a suit and tie like he was meeting the Queen of England. She reamed him good the first few
visits, but it was an awe-inspiring experience to see him in the kitchen with her, cutting and
battering tomatoes while the two chatted, unaware that I was viewing the tender moment.
Next thing I knew, she took ill and Kem started footing the bill for her medical care, not
settling for anything less than the best medicines and specialists Texas could provide. Every
Sunday we would take the hour’s drive to have church service with her and dinner until she
passed away.
The day he proposed was something I would have never imagined. Kem knew I had
insecurities about us dating, mainly due to his parents being very vocal about me not being
a proper suitor for their son, a Sutter heir. I constantly received awful scowls from my peers
and hurtful, backhanded comments from his family. Kem had been grown to be an eligible,
elite bachelor for any of the prosperous Texas-bred debutants. His choice of a lower-middle-
class black girl with no familial background outside of her grandmother was unacceptable
by all. Those things alone were enough to give anyone doubts, but then the last tennis
tournament of the season in our senior year occurred. Of course I was present in the front
row of the bleachers, cheering Kem on. That season the team was undefeated, so it was no
surprise that they slaughtered the visitors in the final game.
As Kem approached the net to shake his opponent’s hand, the stadium lights were
glaring on his sweat-soaked shirt. Suddenly he was taking his cap off, shaking out his
wet cinnamon hair, and lifting his jersey off to reveal his muscular chest and bulging abs.
Screams erupted from all of the scandalous women who wanted to steal him away. As they
were celebrating the free show he was giving, tears started to form when I caught sight of
his purpose of putting himself on display. All the shouting started to die down when the
onlookers knew what I knew. In big, bold lettering, Kem had “Babygirl” inked permanently
over his left-side ribs. He shouted to the masses, “Victoria, you are now and will always
be my rib until my last breath. Will you do me the honor of being Mrs. Kemington Sutter?
Please marry me, Babygirl!” The crowd quieted. I was stunned and didn’t know what to do.
A man next to me cleared his throat and nudged me. I began to shake my head repeatedly.
“Yes…yes,” I said finally. Applause started slowly. Kem moved across the sand and
lifted me over the railing. The minimal clapping began and grew in volume, then Kem


wrapped his arms around me and whispered, “Thank you for being mine,” into my ear.


Reviews of both will be posted shortly...